This piece took place in the city of Pontiac, Michigan.

The coach (the owner of the building, who is a former boxer and the former mayor of Pontiac) gives me an hour boxing lesson. There are no viewers in the gym, but they can watch the lesson on the video feed.

After the lesson, the coach and I get into a 1979 Pontiac Catalina parked outside the gym. We turn on a sound loop. We drive up and park in front of the gallery. I pick 5 viewers dressed in dark clothes to ride in the car. I give each passenger and the driver a fake, battery-operated candle to hold. I tell them to face forward and not speak. I get in the trunk –which contains 500 pounds of rock salt– and close it most of the way.

We drive around the block as I pour the salt through a funnel, encircling the block. The car gets a flat tire as we drive around the block, but we continue until we have circled back to the gallery. The coach/driver backs up the car to the gallery door. I get out of the car and open the doors to the car so that the passengers can get out. The coach and some viewers start to change the tire on the car. I take a smoke machine out of the trunk, place it under the tailpipe, and plug it in. I hook an extension cord (connecting the smoke machine and clock to the main power) to a ring tied to the back of the car.

I then take four 50-pound bags of rock salt out of the car and pour them around the edges of the gallery. I go around several times, forward and back, making the salt tidy. During this time, the car battery dies and the coach along with some viewers jump start the car. After the car is started, I am done tidying up the gallery salt, and the gallery is full of smoke, I get in the car and drive off, unplugging the extension cord. This turns off the smoke machine and the clock, stopping time. 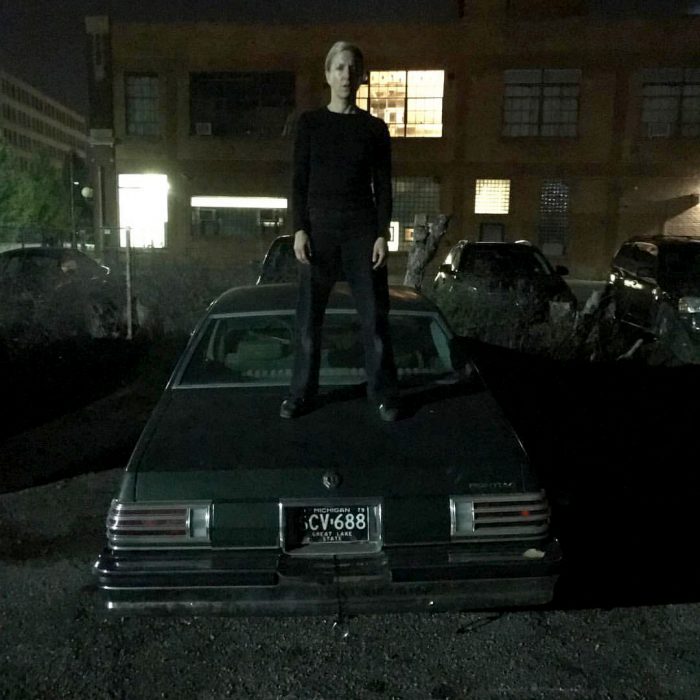